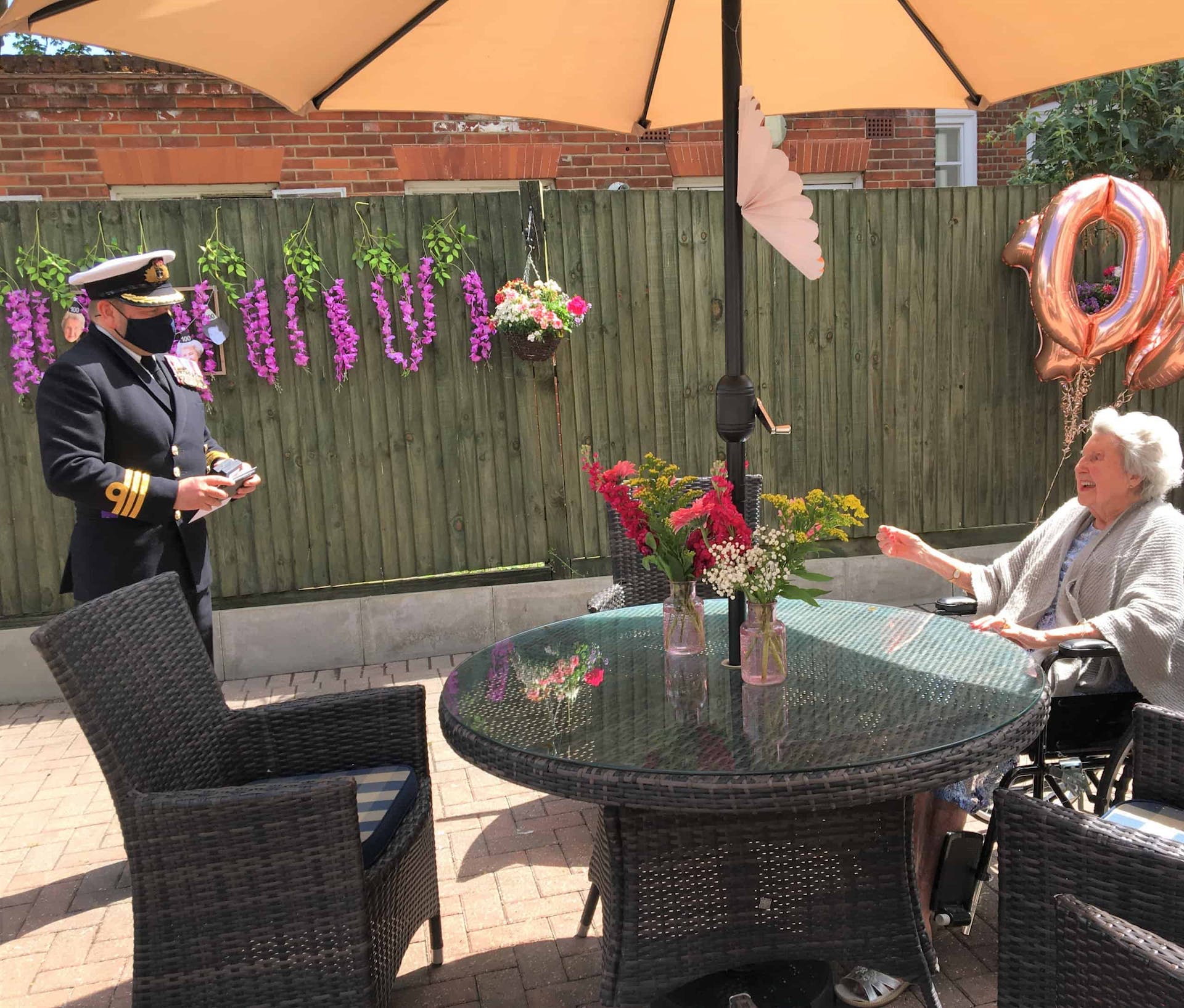 Former Wren and resident at our Woodland Grove Care Home, Jacqueline Dyde, has finally been presented with her war medals after 75 years, as a surprise for her 100th birthday. 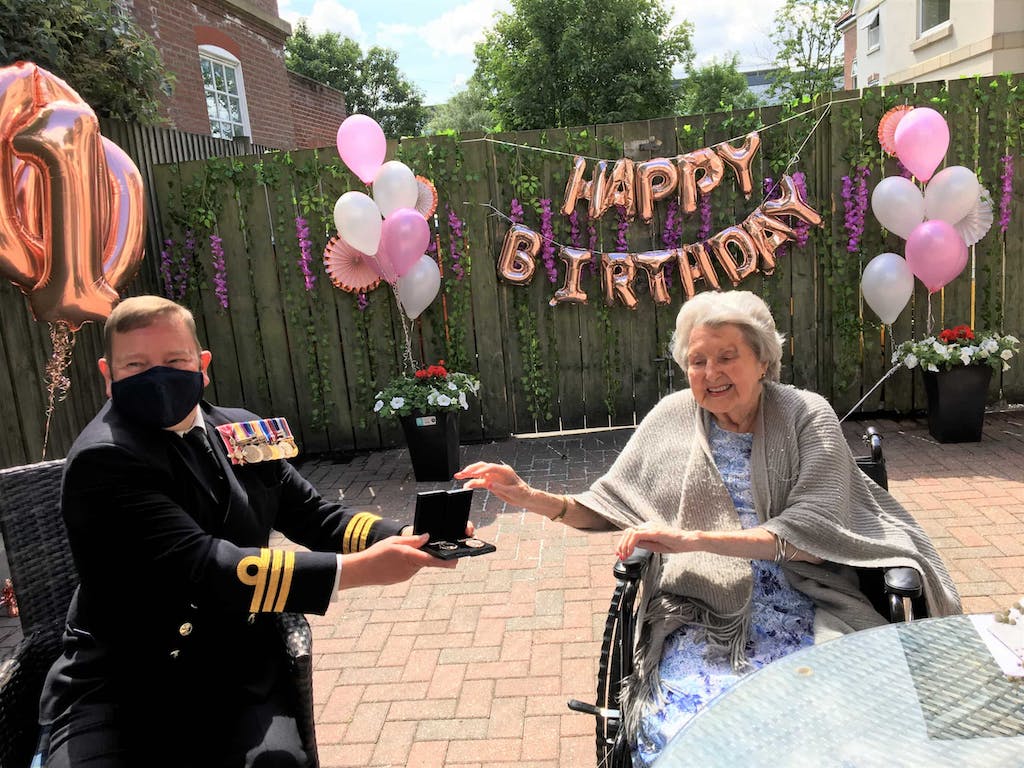 Jacqueline served as a signaller with the Royal Navy during World War II, with postings to Egypt, India and Sri Lanka. With her landmark birthday looming, Jacqueline mentioned to her grand-daughter, Caroline, that it might be time to finally get her medals.  That was all the prompting Caroline needed!

Caroline said, “I made contact with the Ministry of Defence who were able to send the medals through to me. Grandmama always talked to me about the War.  She loved the travelling and it inspired a lifelong interest in visiting different countries and meeting new people.

“She is modest about her war service and never saw herself as a hero, especially as she lost family members in the conflict and her second husband was recognised for his service at El Alamein. But she did earn them, so has every right to claim them!”

Jacqueline, a daughter of a clergyman from Cornwall, joined the Wrens aged 18 in 1939.  She started as a steward on board HMS Defiance at Plymouth before being sent to Warrington to learn coding.

Her first posting was to Egypt where she and her colleagues enjoyed swims in the Suez canal and visiting the Pyramids.  But it was on board a troop ship, the Devonshire, en route to Sri Lanka, where the reality of war really hit home.

“It was Christmas Day and just as dinner was finishing, action stations sounded,” Jacqueline remembered.  “We dashed to the upper deck and our stations.  An unfortunate ship some way ahead had been torpedoed but we all had to just stand there and chug along towards it.”

Her final posting to the Sri Lankan capital, Colombo, was her favourite.  Serving on HMS Anderson, Jacqueline had the opportunity to meet Lord Mountbatten.  When asked, she told him her work was “a bit dull”.  Although he found it amusing, she was later reprimanded for not having the right attitude.

“The funny thing about that situation,” said Caroline, “is that the “dull” work she was doing was actually a crucial part of the war effort – she was communicating intercepted signals from Japanese war ships back to the code breaking experts at Bletchley Park!” 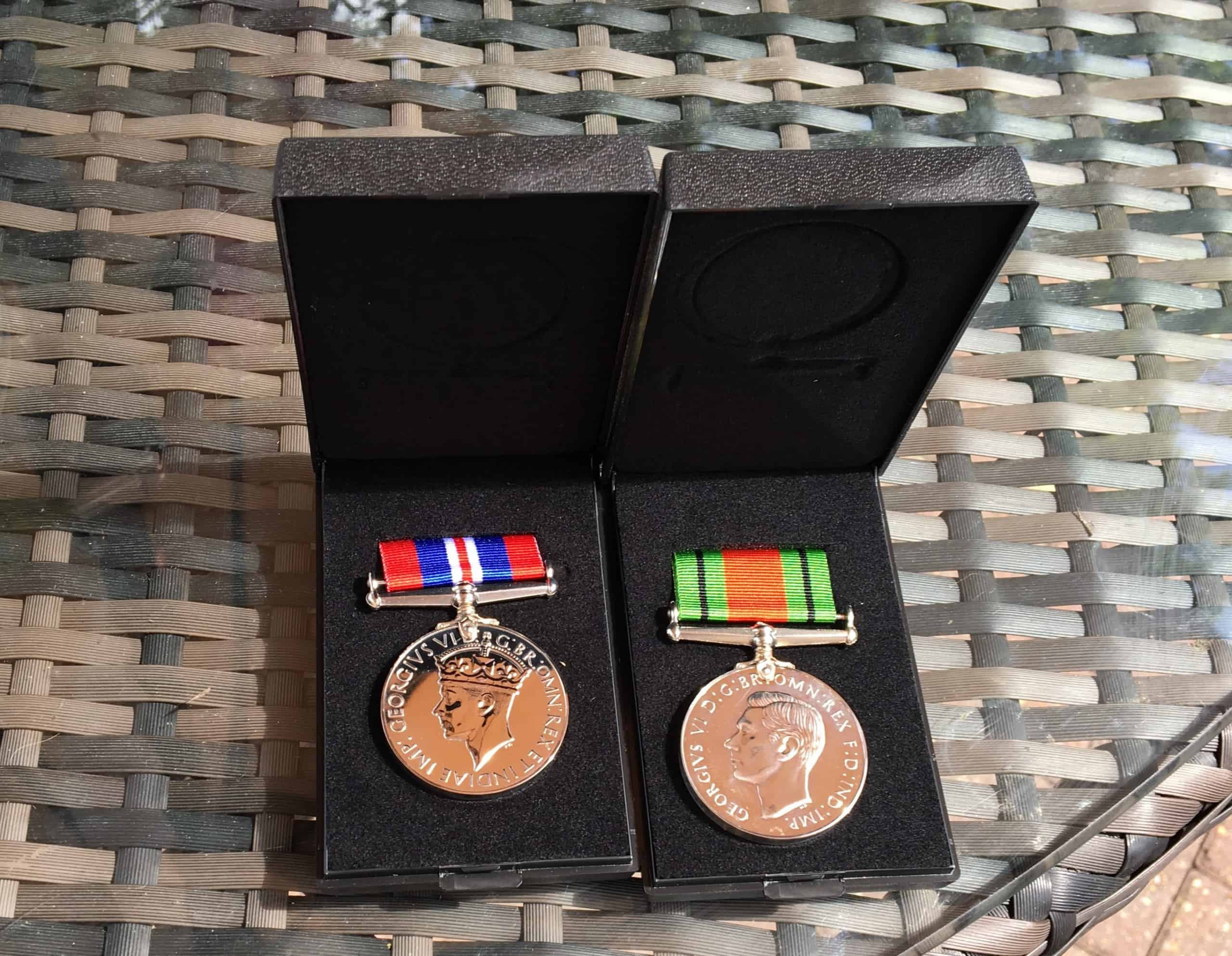 After the War, Jacqueline settled in London where she brought up her son Charles, and worked as a secretary.   Life was so busy she never applied for her service medals.

75 years on, the Defence Medal and the War Medal were presented to her at Woodland Grove Care Home by Commander Andy Swain MBE, Chief of Staff of the Naval Regional Command Eastern England, in front of Jacqueline’s family and staff from the home.

“I’m absolutely thrilled!” said Jacqueline, “and to be given them by such an important personage is even more wonderful.  I’ve never had a birthday like it!” The garden was decorated with balloons and a banner celebrating Jaqueline’s 100th year. 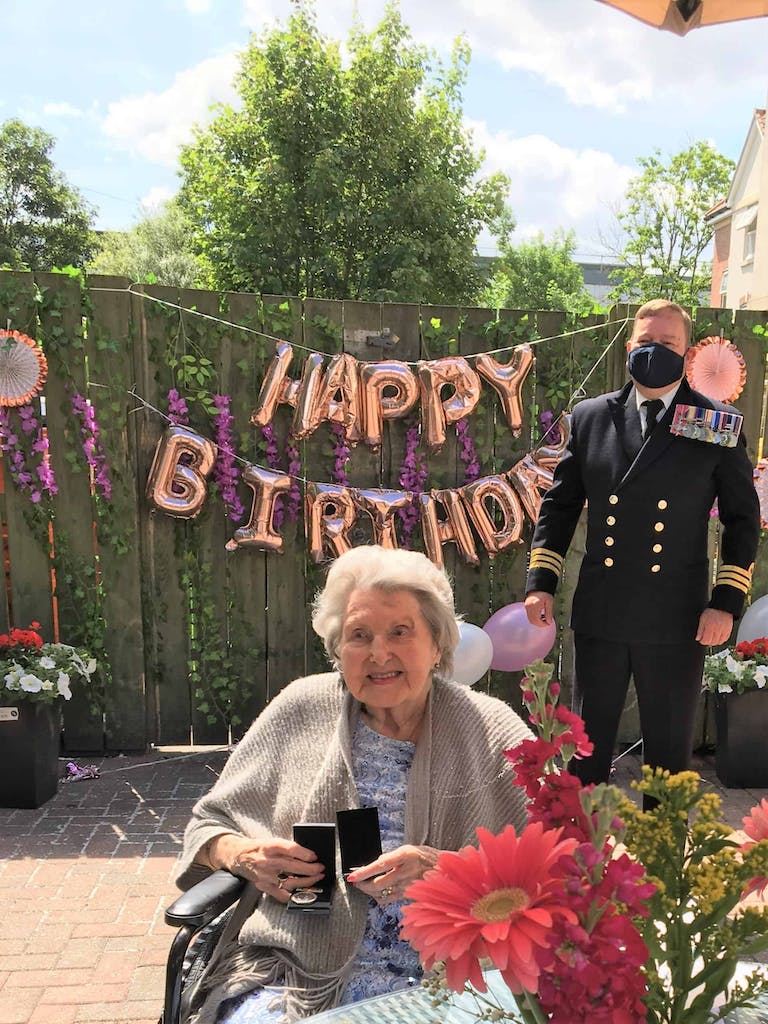 “It was a pleasure to be part of such a joyous occasion. Our care is tailored to our residents and it’s wonderful to see the joy such a personalised event can bring.”

Caroline was equally delighted with how the day went and mentioned, “Hazel and her team were amazing in supporting our family to make this the most special day.  As a family, we can’t thank them enough!”

« In Loving Memory of our Resident Pat, one of ‘95 for 95’ to mark Queen’s birthday year
Oakland Care Receives Ground-Breaking Carbon Neutral Award »