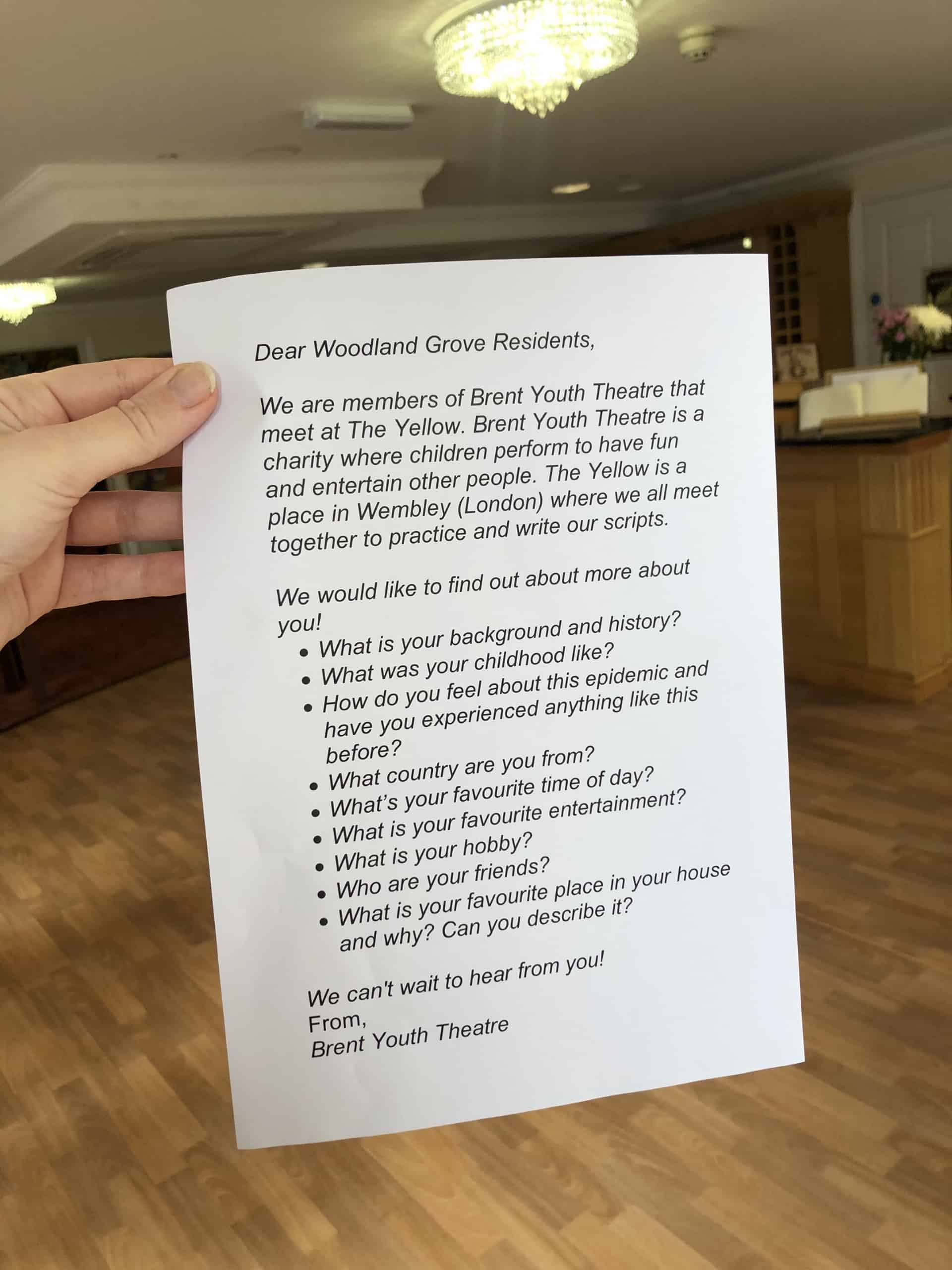 Our Woodland Grove residents have been taking part in a letter writing project ‘Homes of Hope’ in partnership with Brent Youth Theatre and the Unique Community Charity. The project has seen our residents exchange letters with young people on a weekly basis.

93-year-old resident, Norma, has been sending emails to 11-year-old Bethany Sanchia Pereira every week. The relationship has revealed a shared love of aircrafts and ambitions, both past and present, of becoming pilots.

Norma wrote, “I had childhood dreams of being a pilot. My father had been in the Royal Flying Corps in the Great War and my older brother was part of the Royal Air Force in the Second World War. I was also inspired by Joan Hughes, one of Britain’s first female test pilots.”

Norma grew up in Hertfordshire and remembers seeing fighter planes and bombers flying overhead during her childhood. These combined experiences motivated Norma to learn how to fly.

“I used to go flying on the weekends on ‘joyrides’ as part of the Herts and Essex flying club,” she said. “I flew Tiger Moths which were tiny planes. I was determined if there was another war, I would join the Women’s Auxiliary Air Force.”

However, Norma’s other passions took her down an alternative path. She studied at the London School of Economics but her love of skiing prompted her to join a travel agency so she could indulge in her passion every winter.

‘I don’t know what I loved about aircraft but they were so new and innovative, in a way it was like being able to go to the moon!” Norma said.

Thanks to the pen-pal scheme residents are being stimulated and connected with the outside world during the coronavirus pandemic. The scheme has given residents and young people the opportunity to build relationships with each other and learn about each other’s shared interests and hobbies.

Lifestyles Manager at Woodland Grove, Elise Woolnough said, “This project is really giving people here something to look forward to.”

“They exchange letters on a 1-2-1 basis and it’s really building a sense of anticipation – lots of our residents ask when they will next hear from the young people which is so lovely!

“We are building some wonderful relationships and the letters from the young people leave our residents feeling valued and inspired. The project is entertaining and stimulating, but it’s also building bonds and friendships for the future.”

The children have been writing about their special talents and compiled a video for residents at the home, showcasing abilities such as playing the violin and completing a Rubik’s cube.

She said, “I am really excited to see how we can use modern technology to break down barriers.”

“These two groups are not only different in age but also live at opposite ends of London. This is a connection that wouldn’t have happened otherwise; there is something quite magical about that.”

Bethany who is from Perviale, is looking forward to her next letter from Norma. She said, “I love writing to Norma and hearing all about the Tiger Moths, and the flying her father and brother did. To have someone who is older than me as a friend is quite different.

“I’ve been travelling on airplanes since I was two and I just think it would be wonderful to be a pilot. I’m going to join the Air Cadets when I’m old enough and I know that if I want to follow this as a career, I need to study physics, maths and English.

“Norma and I have also written about the different technology in our lives and what she did for entertainment when she was younger. She seems like a really lovely person.”

Research shows that activities shared by both young and the elderly have positive effects for older people in residential care, giving them a sense of purpose and improving their self-esteem.

The emails have been a great benefit to Norma as they have helped build her understanding of the modern world Bethany is growing up in.

Norma said, “Bethany’s letters have made me realise that there is no resemblance between commercial flying and flying before the war – the planes then were like old kites! It makes me realise how much things have changed.”

“It has been nice to think of all these things and the differences there are between now and then. It’s so lovely to think of the opportunities Bethany has now and that she has the chance to follow her dreams.” 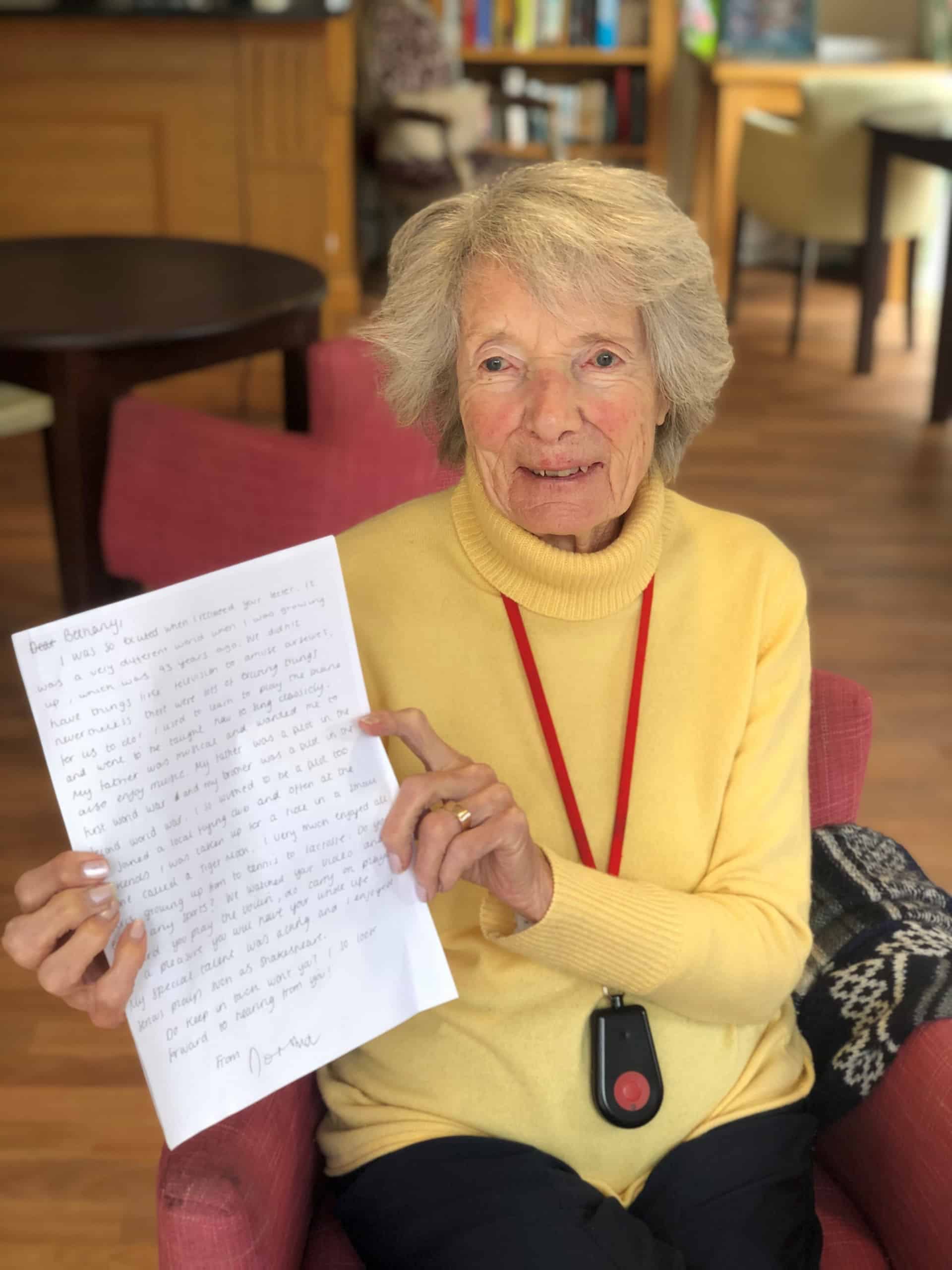