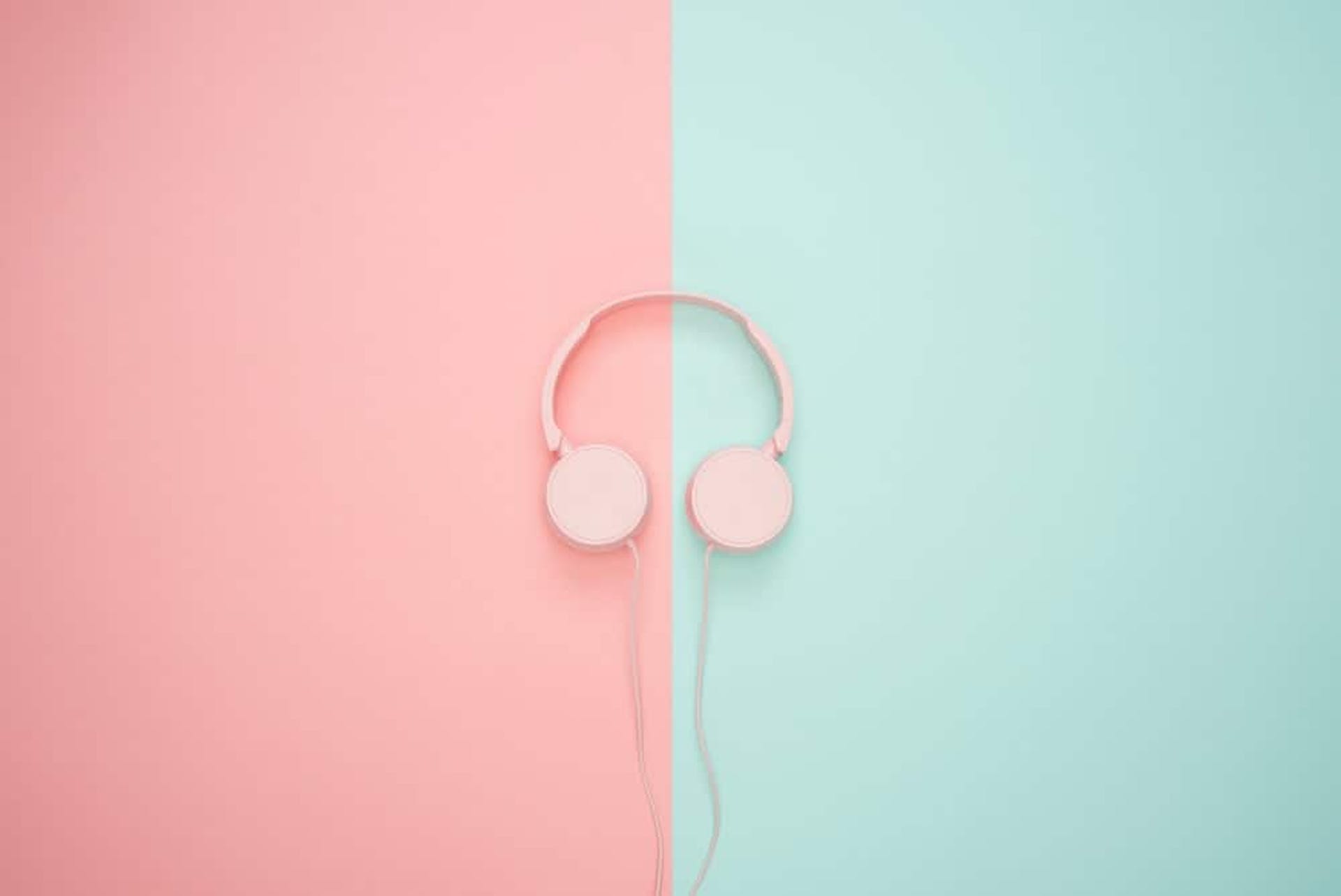 Our residents at Lambwood Heights Care Home have been enjoying memories of Sunday lunch with the family, trips to the cinema and live concerts thanks to a donation of refurbished MP3 players by dementia charity Purple Angel Global.

Families and close friends were asked to pick out 15 favourite songs to be included in the MP3 players so that each one would be meaningful to our residents. The bespoke playlists created helped in triggering resident’s ‘musical memories’ from the past.

Home Manager Sonia Kasese said, “Music has great benefits for those living with dementia. We all experience a great deal of enjoyment in hearing songs that we love, but it’s particularly important for our residents with cognitive impairments.

“Our brains can access musical memories far longer so it’s a great way of making connections with our residents. The familiarity of the songs is very comforting, plus it’s a chance to reminisce about the memories the music evokes.”

Our resident Ray Conway enjoyed a bespoke playlist of 15 songs created by his son Mike.

Mike said, “We knew there were songs from two particular albums we had to include for him. “When we were children, every Sunday lunchtime we would either play one record which had songs from ‘The King and I’ and ‘South Pacific’ on it, or the soundtrack from the Rodgers and Hammerstein musical, ‘Flower Drum Song’.

“Dad can’t always remember which songs he’s listened to but the enjoyment on his face is clear! And it’s brought back memories for me too!” 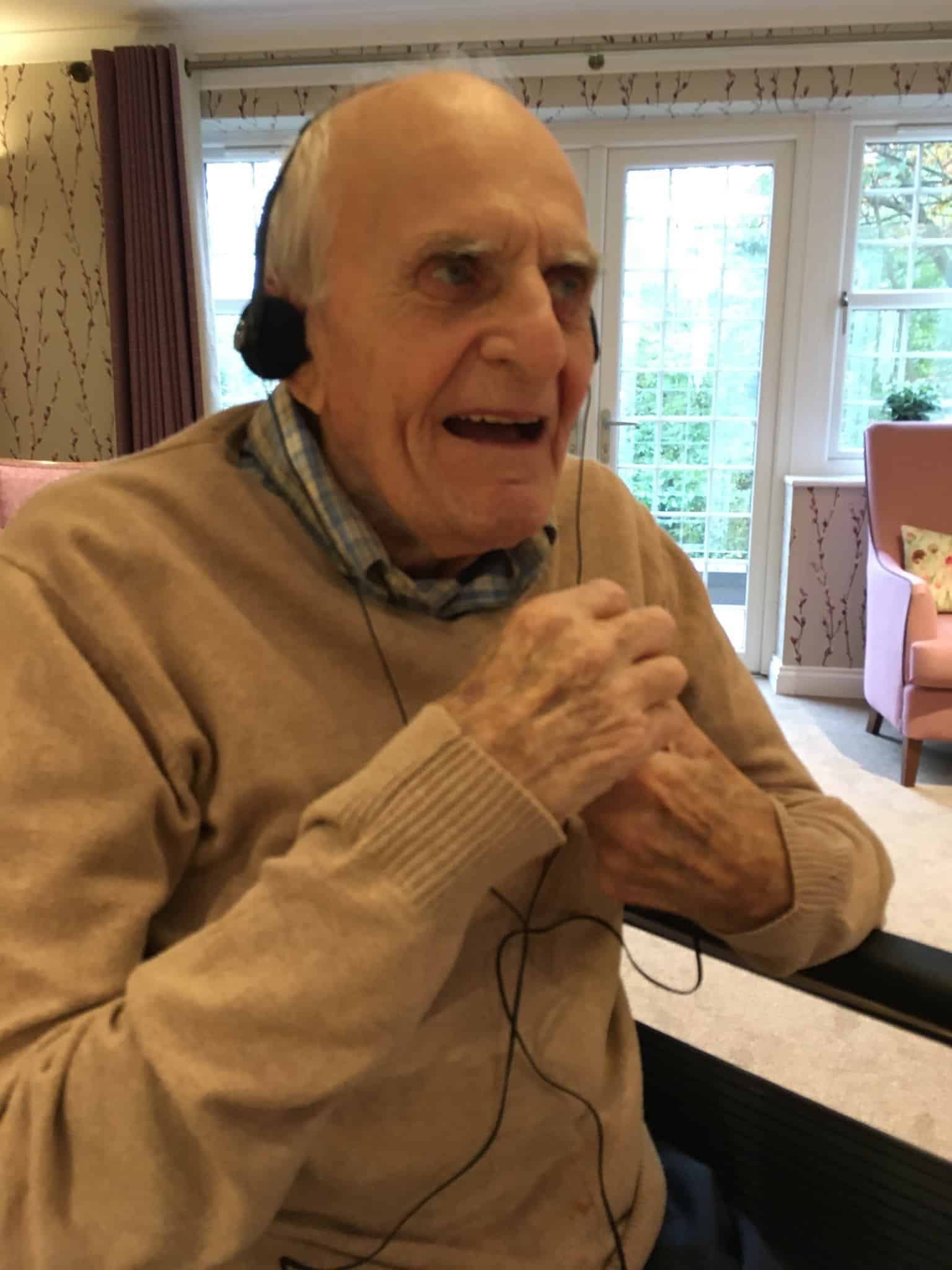 Our resident Ann received a playlist created by her husband Richard who had chosen songs from artists they had seen together in concert.

Richard said, “Her MP3 player has songs from George Michael, Celine Dion and Julio Iglesias – who we actually met! We lived in Spain many years ago and we saw him perform in a very small venue.  He came over and chatted and then sang ‘Feelings’ to us which was very special.

“Ann clearly enjoys listening to the music. It was a big part of our lives and it was very hard to choose just 15 songs! But I’m sure they all bring back lots of happy memories for her.” 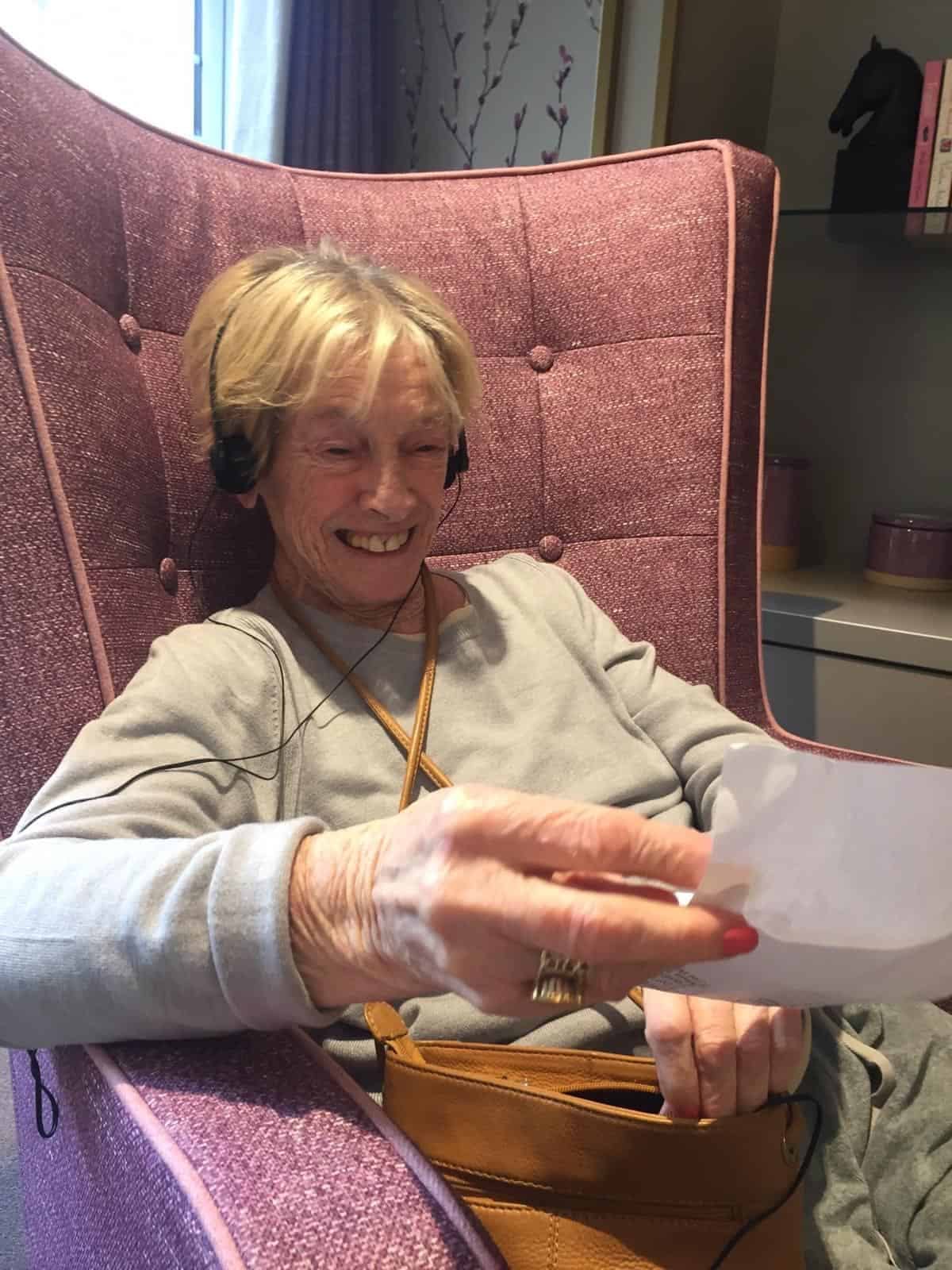 Purple Angel founder Norms McNamara said, “We found that, by placing headphones on residents with dementia intermittently during the day, their brain activity is stimulated and switches on all kinds of emotions – even bringing back the ability to converse in some cases.

“We have found that whilst the music is playing, they can sometimes remember where they heard the music, what they were doing at the time and possibly in some cases how they used to love playing a musical instrument.  It is without a doubt amazing to witness.”

Sonia continued, “We are incredibly grateful to Norrms for his donation. The MP3 players are a fantastic way of connecting residents with their loved ones at a time when they can only see them for short periods in our Covid-safe Summerhouse.

“We can see the difference they are making to our residents here. It’s wonderful to see the smiles and laughter.”

« Lambwood Heights Christmas card winner
Why are we safe for your loved one at Elsyng House Care Home? »