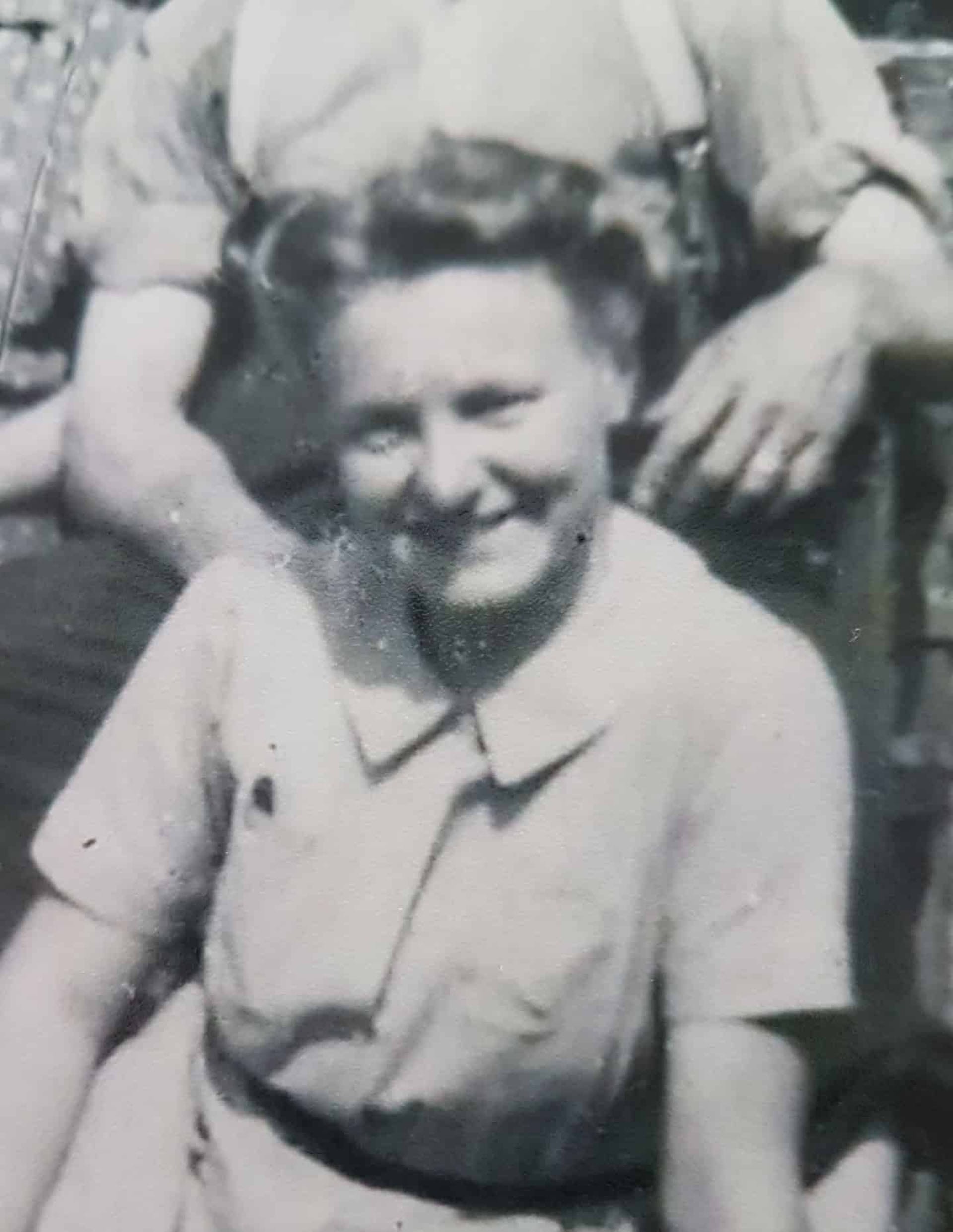 Our 91-year-old resident at Beechwood Grove in Eastbourne, Irene Goddard, was just a teenager when the war in Europe finally came to an end on May 8th 1945. With dreams of becoming a journalist, Irene as a 16-year-old kept a diary during war time. Having discovered this diary, it has provided a fascinating insight for Beechwood Grove staff and also helped bring back war memories for our residents on the 75th anniversary of VE Day.

Irene lives with dementia and music is often key in connecting her to comforting memories. She enjoys weekly Skype sessions with her son Mark and his family where they regularly play live music and sing for her.

Irene’s diary showed that her love for music has been long held as her diary entry for the night of May 8th 1945 details how she enjoyed dancing to the ‘Hoki Koki’ and ‘Knees Up Mother Brown’ as she revelled with the crowds in central London.

Care Home Manager at Beechwood Grove, Caroline Braime said, “Her diary has been fascinating to read, she wrote very well for a 16-year-old and she really captures the excitement of the day.

“It’s also been a really useful point of reference to be able to reminisce with other residents who also have memories of the day.”

Irene’s diary was shared with staff at the home by Irene’s daughters, Hilary Boardman and Kay Goddard. Kay reminisces, “Mum kept diaries for years, but we didn’t find her memories of VE Day until a couple of weeks ago when my niece was going through them.”

“Mum had always told us she went to Trafalgar Square but it’s been amazing to read her account of it. We used to think her diaries were just a bit of fun when we were children but we realise now how well she wrote.”

Irene lived in the suburbs of London and described the capital’s streets as being “drab, bomb-scarred” and “dirty”. But on VE Day she wrote how they had been transformed into “romantic wonderlands” and “London once more became a city of beauty.”

Irene details, “The whole city of London went mad!” “The everyday sober, stay-at-home was clinging to a lamp post six foot above everyone else in Piccadilly Circus.”

She describes how she and five friends joined the crowds outside Buckingham Palace, where the chant “We want the King!” brought the Monarch and his family out onto the balcony.

“Then the cheers broke out,” “deafening to the ear, and the crowds surged nearer to the gate and yelled “Where is he?” “I can’t see him!” “Lift me up someone!” etc.”

Her diary records Admiralty Arch being “the prettiest sight that night in my opinion” and how men on top of the Arch lit fireworks. Searchlights played upon the surrounding buildings and she noted a soldier “stripped to the waist, his back plastered in lipstick,” leading the crowds in a song.

Her party of friends were enjoying the celebrations so much they missed their last Tube home and were almost forced to walk the whole way until they spotted an army lorry that they could jump into.

Irene concludes, “We were deposited very near our homes,” “I crawled into bed at 3 o’clock in the morning and was never so pleased to sleep.”

In the end, Irene decided on not becoming a journalist but instead became one of the first NHS nurses and worked at the Westminster Opthalmic Hospital.

Kay added, “We’re looking forward to when the lockdown is over and we can visit Mum, but we also want to go and see my sister to read more of Mum’s memories.

“There’s a lot about what we had for dinner and where we went on holiday but there will be more historical events that she’ll have recorded.” 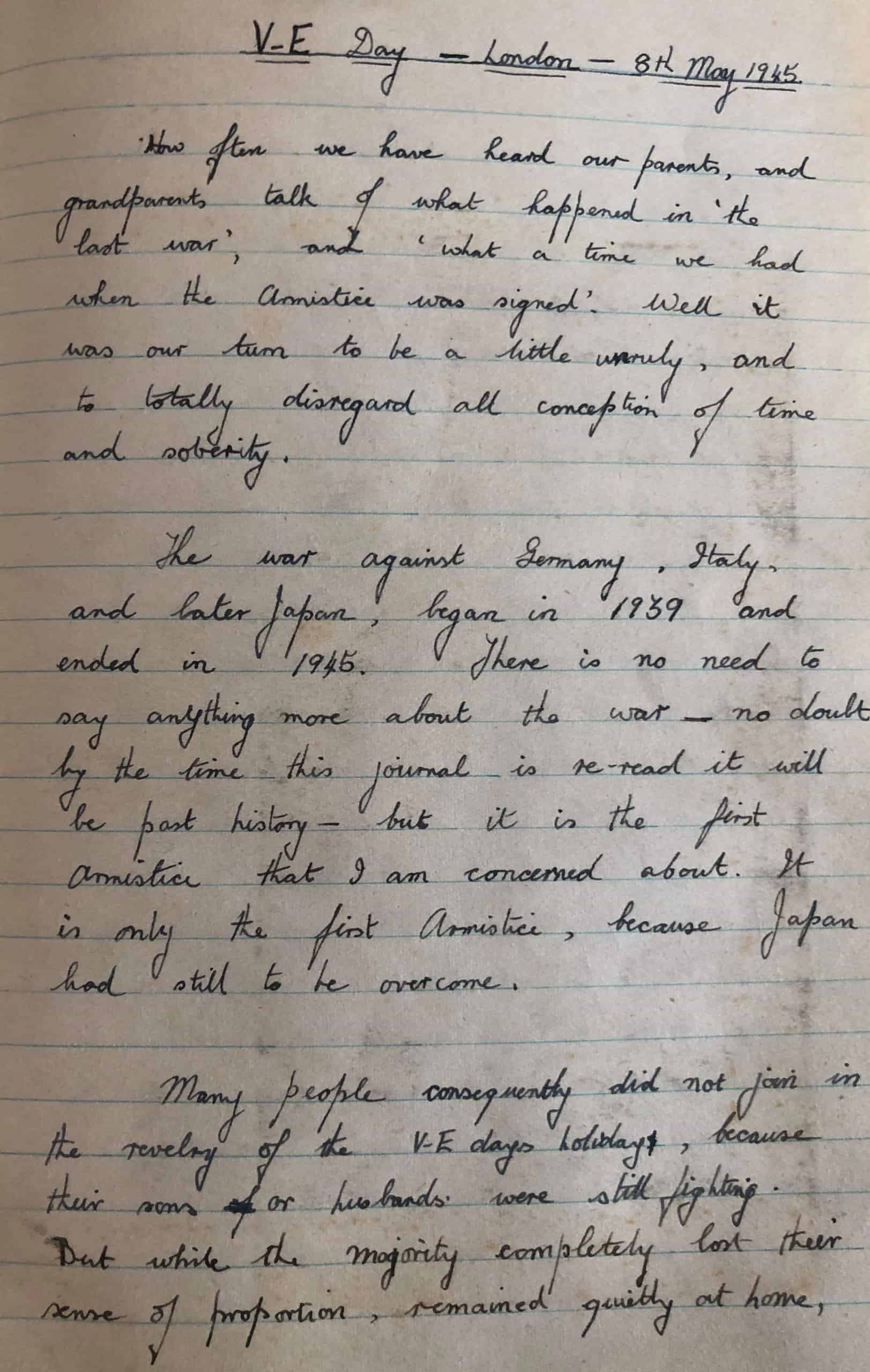 Residents at Beechwood Grove celebrated this year’s VE Day in style. The day started off at 11:00 am with a two-minute silence of national remembrance to commemorate the 75th anniversary of VE Day. Staff decorated the home with VE Day posters, war time photos and union jack bunting.

Residents relished a beautiful fillet steak lunch courtesy of Dean Quality Butcher who generously donated their finest fillet steak for residents to enjoy. Residents also feasted on a wide array of sandwiches and cupcakes topping off with cutting a delicious VE Day themed cake. Our staff went above and beyond making sure our residents had fun listening to 1940’s music and reminiscing about war time stories in the afternoon. 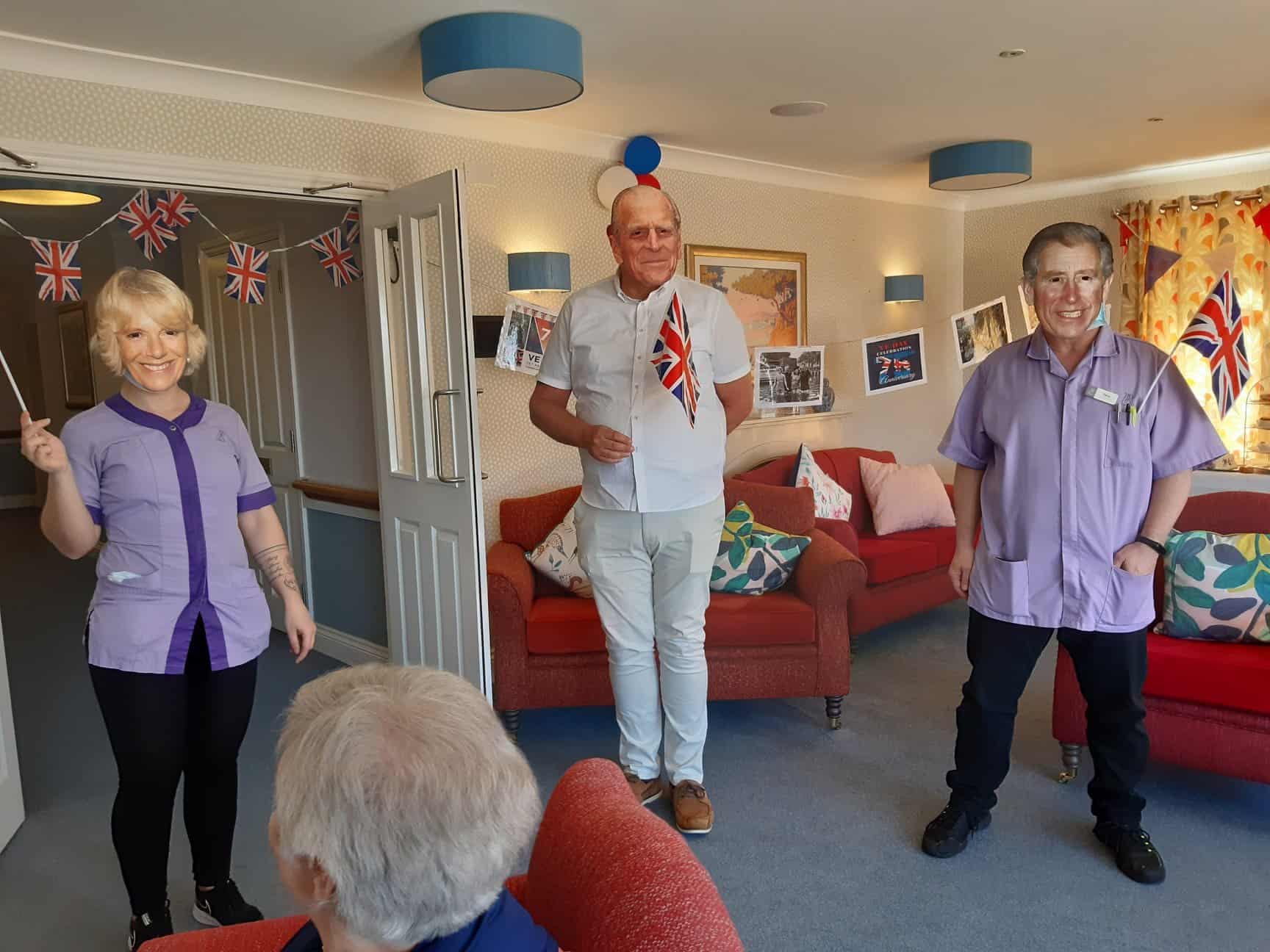 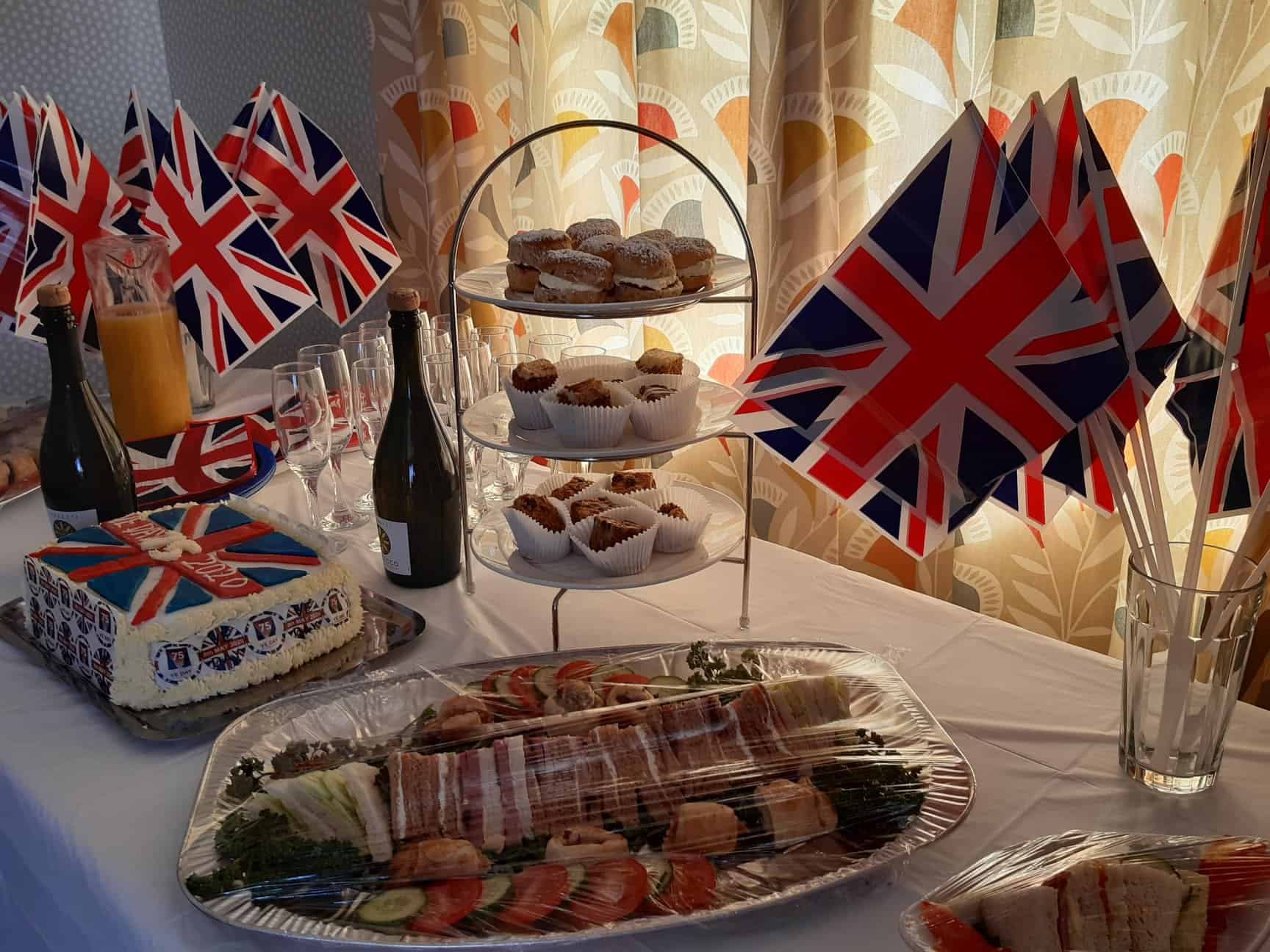 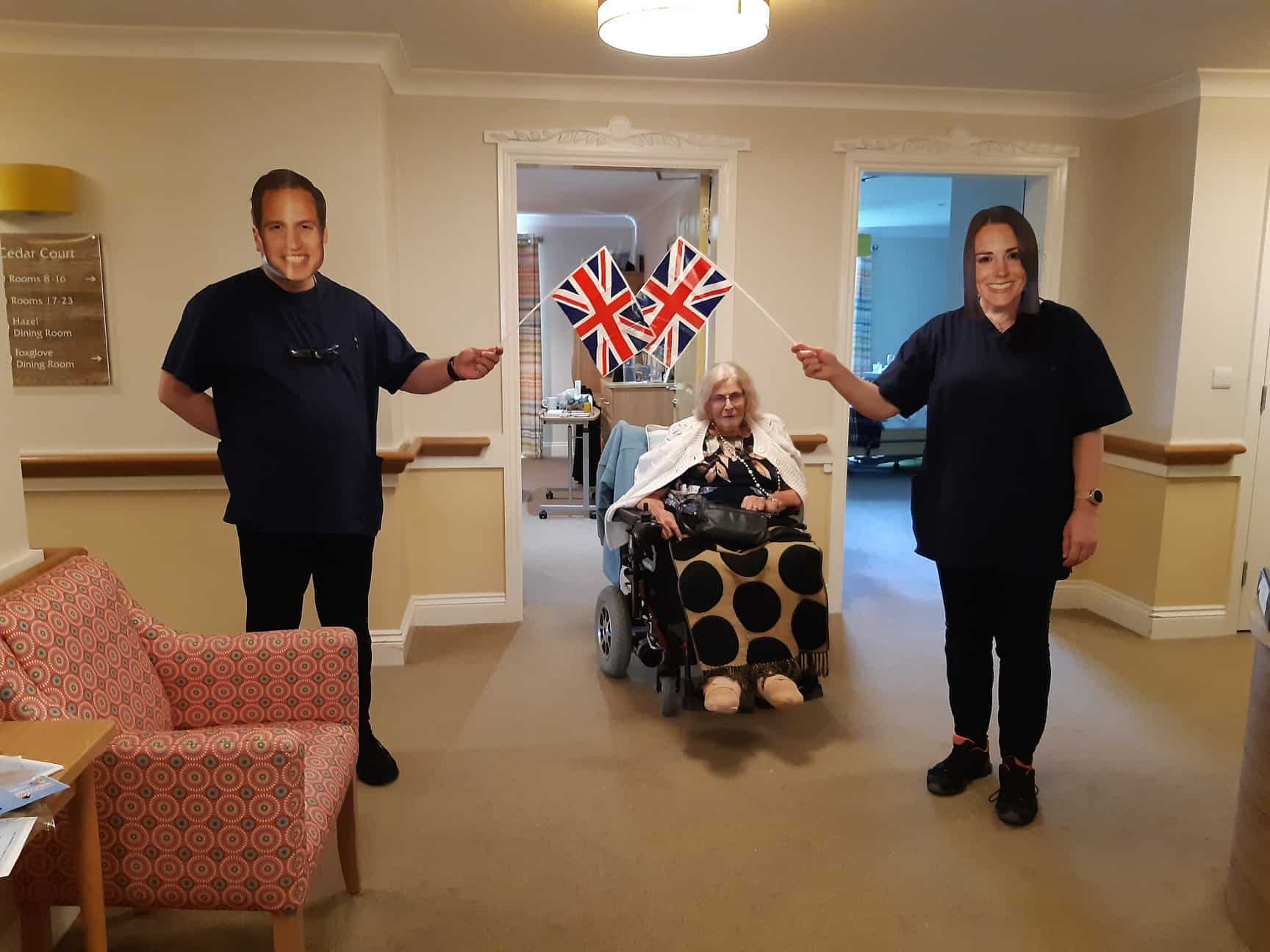 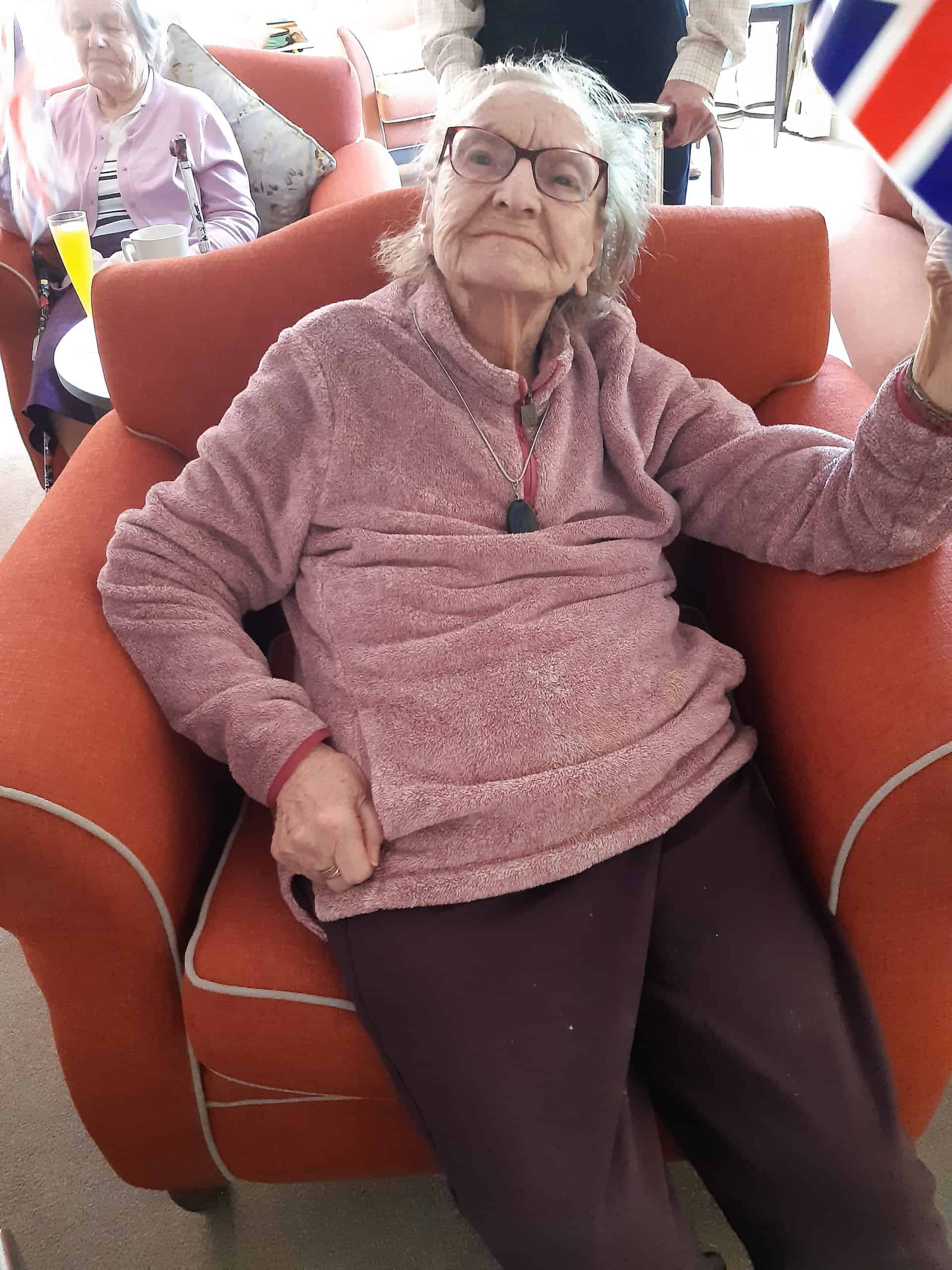